Light and Beauty in Second Life

Shambala introduced us to one of the beautiful new areas on her Sanctuary – The Mists of Avalon!
(click on first image below to scroll through) 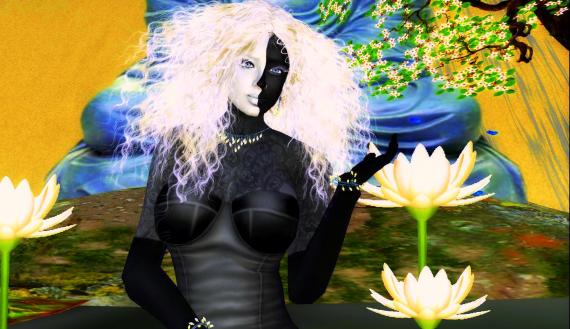 There comes a time when all life on Earth is in danger. Great barbarian powers have arisen. Although these powers spend their wealth in preparations to annihilate one another, they have much in common: weapons of unfathomable destructive power, and technologies that lay waste our world. In this era, when the future of sentient life hangs by the frailest of threads, the kingdom of Shambhala emerges.

You cannot go there, for it is not a place; it is not a geopolitical entity. It exists in the hearts and minds of the Shambhala warriors—that is the term Choegyal used, “warriors.” Nor can you recognize a Shambhala warrior when you see her or him, for they wear no uniforms or insignia, and they carry no banners. They have no barricades on which to climb to threaten the enemy, or behind which they can hide to rest or regroup. They do not even have any home turf. Always they must move on the terrain of the barbarians themselves.

Now the time comes when great courage—moral and physical courage—is required of the Shambhala warriors, for they must go into the very heart of the barbarian power, into the pits and pockets and citadels where the weapons are kept, to dismantle them. To dismantle weapons, in every sense of the word, they must go into the corridors of power where decisions are made.

The Shambhala warriors have the courage to do this because they know that these weapons are manomaya. They are “mind-made.” Made by the human mind, they can be unmade by the human mind. The Shambhala warriors know that the dangers threatening life on Earth are not visited upon us by any extraterrestrial power, satanic deities, or preordained evil fate. They arise from our own decisions, our own lifestyles, and our own relationships.

So in this time, the Shambhala warriors go into training in the use of two weapons. The weapons are compassion and insight. Both are necessary, the prophecy for foretells. The Shambhala warriors must have compassion because it gives the juice, the power, the passion to move. It means not to be afraid of the pain of the world. Then you can open to it, step forward, act. But that weapon by itself is not enough. It can burn you out, so you need the other — you need insight into the radical interdependence of all phenomena. With that wisdom you know that it is not a battle between “good guys” and “bad guys,” because the line between good and evil runs through the landscape of every human heart. With insight into our profound inter-relatedness, you know that actions undertaken with pure intent have repercussions throughout the web of life, beyond what you can measure or discern. By itself, that insight may appear too cool, conceptual, to sustain you and keep you moving, so you need the heat of compassion. Together these two can sustain us as agents of wholesome change. They are gifts for us to claim now in the healing of our world.

Many in the Tibetan lineage believe that this is the time of this ancient prophecy. If so, perhaps we are among the Shambala warriors. http://shambhala.today/shambhala-prophecy/

Shambhala is said to be a place of peace, tranquility & happiness.

A society where all inhabitants are enlightened & an inner realm
accessed through deep communion with Divine Source.
Seek this Communion & you too may discover the keys to Shambhala are within you.

Join us in Second Life
http://maps.secondlife.com/secondlife/Satori/124/148/34

I would like to say a few words about the history and evolution of Shambhala Sanctuary. Asking first for your indulgence.

As many of you know… I believe the land of Shambhala actually exists. You may not be able to access it by plane, train, or car but it is a place each of us holds the keys to, hidden safely deep inside our hearts. Each week at pilgrimage, we call upon our keys to open the gateway to Shambhala and gain access to our own Muse’s.

Let me share my tale from the beginning though.

In 2005, in deep meditation [much longer story] I was given the name Shambala and told It was my mission to assist in bringing the vibration of the mystic realm back into consciousness. At the time I had no idea what that meant or how I would go about doing so, but few years later in 2009 my Auntie introduced me to Second Life. Still not realizing what a profound impact this would have on my life, I was inspired to take the name
I was given a few years earlier, Shambala.

That first year in Second Life, [2009] I began working with a wonderful man, a teacher and guide, who pushed me very hard to take on a teaching role in Second Life. I’ll be eternally grateful to him. At that time my focus was on introducing a shamanic practice. [my personal spiritual practice] and when the time came to create a group, naturally A TIMELESS JOURNEY was born.

Since then many things have expanded and some have contracted.
Wonderful lessons have been learned, some through deeply painful experiences and some through ecstatic joyful experiences. I’ve found amazing personal relationships here. Friends and Family from past lives, some needing forgiveness and healing and some here to bring comfort and support but all deeply rewarding. I like to say.. each one is a gift. some gifts are just more difficult to open than others but still valuable and worth the effort.

Part of this evolution is about creating a space for the work. [longer story here as well but no need to go down that alternate route just yet] The space that has evolved is Shambhala Sanctuary. My name is also a title and a mission. The mission being to bring back into consciousness the energy and vibration of the mystic pure land of Shambhala. As the Timeless Journey group fades into the shadows, Shambhala Sanctuary is birthed and thriving. This is your invitation to join me in awakening the memory and purpose of the mystic land of Shambhala within us all.